A photo of a dog in a car, accompanied by an unusual sign, has been retweeted on social media site Twitter more than 57,000 times and has caught the world’s attention.

A Twitter user, @fioses, posted the photo a patiently waiting pooch sitting in an auto on what appears to be a sunny summer’s day. 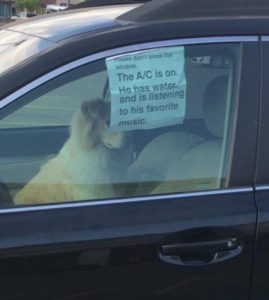 The picture tweeted by @fioses

Usually this would be enough to get tempers flaring, as all sensible people know the dangers surrounding scorching vehicle temperatures and dogs left inside to melt.

There have been a number of high-profile incidents involving the death of dogs that have been left inside hot vehicles by unthinking owners, including the death of two police dogs that were left unaccompanied in a vehicle by a police officer in June 2011.

However, no one need worry about the pooch in the popular photo, according to its unidentified owner, who left a sign on the auto window, claiming that their pet was enjoying the air conditioning and listening to some tunes.

The sign reads: “Please don’t break the window… The A/C is on. He has water. And is listening to his favourite music”.

And indeed, the newly famous dog appears to be suffering no discomfort as he watches calmly on from the car window. However, a spokesperson from the RSPCA said they would still be “concerned” about an animal trapped in a vehicle on a hot day, despite any signage that suggested that there was no need for concern.

The RSPCA spokesperson went on to add: “But every case is different so we couldn’t say for certain if the dog was in danger. Some cars are adapted to make animals more comfortable and this may have been the case here.”

If you are out and about and spot an animal in a vehicle that appears to be distressed or in discomfort, you are urged to contact the RSPCA on their 24-hour line: 0300 1234 999.